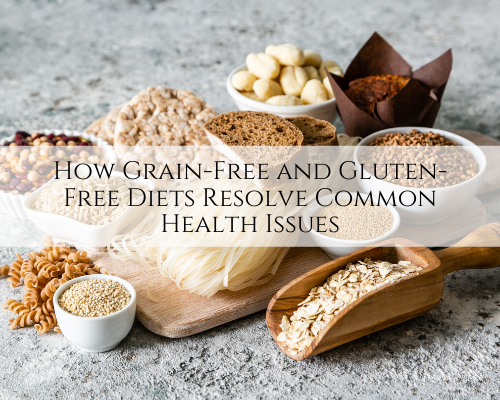 Is Gluten Bad for You? How to Recognize Gluten Intolerance and Gluten Sensitivity Symptoms

Gluten sensitivity and intolerance are common issues for our patients. In fact, gluten may be the culprit behind many of your health concerns, whether they’re digestive related or not. However, gluten is just the tip of the iceberg. Many people have not only wheat intolerance and gluten sensitivity symptoms but they react to non-gluten grains, too. Read on to find the answer to the question, “Are grains really bad for you?”

Why Is Gluten Bad for You?

You have probably heard of celiac disease. In celiac disease, eating gluten sets off an autoimmune attack against a person’s small intestine, causing diarrhea, malnutrition, and many other problems.

People with non-celiac gluten sensitivity or gluten intolerance also have trouble with gluten. These people show symptoms similar to those with celiac disease when they eat gluten, but they usually don’t show the same blood antibodies or intestinal damage that is seen in celiac disease. Some people with gluten sensitivity may have antibodies against gluten, such as IgG, IgA, or IgM (immunoglobulins G, A, or M). However, it’s not always the case. These immune reactions aren’t to be confused with wheat allergy, which is an IgE response. (To learn more about the difference between food sensitivities, allergies, and intolerances, read this blog post.)

Gluten sensitivity may contribute to leaky gut, a condition where the intestinal wall develops little gaps. This can allow undigested food, bacteria, and toxins to escape the gut and enter the bloodstream, triggering inflammation. Celiac disease, Crohn’s disease, IBS (irritable bowel syndrome), and autoimmune disorders like lupus, type 1 diabetes, and multiple sclerosis are all associated with leaky gut.

In addition, gluten sensitivity can lead to vitamin and mineral deficiencies. That means you may not be absorbing enough vitamin C, selenium, iron, magnesium, zinc, B vitamins, calcium, chromium and more.

I’ve Been Eating Grains My Whole Life: Why Are They a Problem Now?

The grains you’re eating today are not your grandmother’s grains. Wheat and other grains are vastly different from 20 to 50 years ago. Why? There are a number of reasons. First, wheat and grains in general have been hybridized so that they make hardier crops and lighter, fluffier baked goods. Hybridization leads to the wheat containing a lot more of the gluten protein than grains did in the past. Not only are we getting more gluten in the grains themselves due to hybridization, but also the proteins found in gluten and grains have been modified so they look foreign to our bodies. This can lead to many gluten intolerance and gluten sensitivity symptoms.

Second, when wheat is harvested, it’s sprayed with the herbicide glyphosate to dry out the grain and keep it fresh. Glyphosate may be linked to such disorders as autism, Alzheimer’s and Parkinson’s diseases, depression, celiac disease, and anxiety. Pesticides like glyphosate are known to harm our gut microbiome, the community of microorganisms that live in the gut. When there is an imbalance between the beneficial and harmful bacteria in our guts, it can lead to bloating, gas, constipation, abdominal pain and many of the conditions mentioned above.

Grains are also stored in large containers, which makes them vulnerable to aflatoxin contamination. Aflatoxin is a toxin made by certain fungi, specifically Aspergillus flavus and Aspergillus parasiticus. Aflatoxin can be found in wheat, cottonseed, quinoa, peanuts, millet, rice, sunflower and sesame seeds, tree nuts—even coffee, cassava, and chili peppers. Although eating large amounts of aflatoxin at one time can be deadly, people are usually exposed to smaller amounts over time. Long-term aflatoxin exposure is linked to liver cancer as well as autoimmune issues and digestive problems. People can also experience sensitivity to aflatoxin just like they might to specific food items. This illustrates that sometimes other components of grains besides gluten can cause reactions.

Another problem? People are eating too many grains. For most people, every meal will contain wheat or multiple types of grains. Our bodies haven’t evolved fast enough to accommodate this increased consumption of grains.

For these reasons, even if your parents had no problems after eating grains, you may find yourself having symptoms of being gluten intolerant or gluten sensitive.

Gluten Sensitivity and Intolerance Symptoms Often Fly Under The Radar

You may have symptoms from eating gluten and not realize it. When people think about food reactions it’s usually the gut that comes to mind. However, out of every eight people who react to gluten, only one of them has gut-related symptoms. Other people might get symptoms like brain fog or fatigue (see symptom list below). In addition, gluten sensitivity is often delayed. This means you may not feel the symptoms for hours or even days after you’ve consumed gluten or grains. Furthermore, not everyone will experience the same symptoms. Each person will react in their own unique way.

Why Are Grains Bad for You?

The culprit isn’t just gluten. All grains may cause problems. A lot of grains are cross-reactive with one another. The immune system perceives the protein structure of wheat, rice, corn, oats, buckwheat and other grains as being similar. Even quinoa, which isn’t a grain, may confuse the immune system and cause problems due to its similar protein structure to grains. If your immune system is in an upregulated state, it may start to react to these grain or grain-like proteins that aren’t gluten, but look similar enough to gluten. That is what’s known as cross-reactivity. What’s more, a lot of the grains in the modern diet contain a modified, hybridized protein that is genetically changed. The immune system perceives it as foreign, leading to autoimmune concerns.

Corn presents its own set of problems because unless it’s organic it’s almost certainly genetically modified (GMO). In that case a toxin has been added to the DNA of the corn and there’s no way to wash it out. Because it’s GMO, corn is also heavily sprayed with the toxic herbicide glyphosate. Corn is genetically modified to be resistant to the plant-killing effects of glyphosate so that it can kill the weeds growing between the corn plants without killing the corn itself. We talked about the potential health problems linked with glyphosate use earlier in this article.

Often, grains are combined with food dyes. This is true with frosted pastries like cakes and cookies, sometimes even when they’re made with gluten-free grains. When food dyes bind with the grain proteins the digestive system finds it hard to separate the two. The gut now believes the dye-grain protein complex is a completely foreign substance and isn’t sure how to break the protein and the dye apart. This can lead to autoimmune issues as the body attacks what it believes to be a foreign invader.

For all these reasons, functional medicine practitioners often recommend undertaking not just a gluten-free diet but also a grain-free diet.

What is a grain-free diet?

On a grain-free diet, you’ll want to stop eating all of these foods:

Is Gluten Bad For Everyone?

The answer is no. Gluten and grains aren’t bad for everyone. It all comes down to how the body reacts. We are all unique and some people may not react to gluten or grains at all. However, the modification and hybridization of grains means that more people will be sensitive than in days past. The problem may be more widespread in the United States. Many people find that although they react to every grain when they’re in the U.S., in Europe they are able to eat grains without experiencing any problems. This may be because grains aren’t as extensively modified in Europe.

Gluten-free and grain-free diets are especially beneficial for people who have autoimmune disease. These eating plans act as an autoimmune diet that may stop flare ups.

Your Functional Medicine Practitioner Can Help Answer the Question: “Should I Go Gluten Free or Grain Free?”

Embarking on a grain-free or gluten-free diet can feel challenging as it requires dedication and willpower. However, the benefits to your health are well worth the effort. These types of diets can give you more energy, get rid of a cause of brain fog, relieve autoimmune issues and reduce flare-ups, reduce leaky gut, and improve digestive health issues such as irritable bowel syndrome. A functional medicine doctor can evaluate whether these types of diets are right for you. In addition, this type of doctor can recommend gluten sensitivity and intolerance treatments, as well as provide encouragement, support, and guidance. A functional medicine doctor can also order tests that identify gluten intolerance and sensitivity. Contact us today for an in person or phone appointment to heal your gut.