Causes and Natural Treatments For Depression 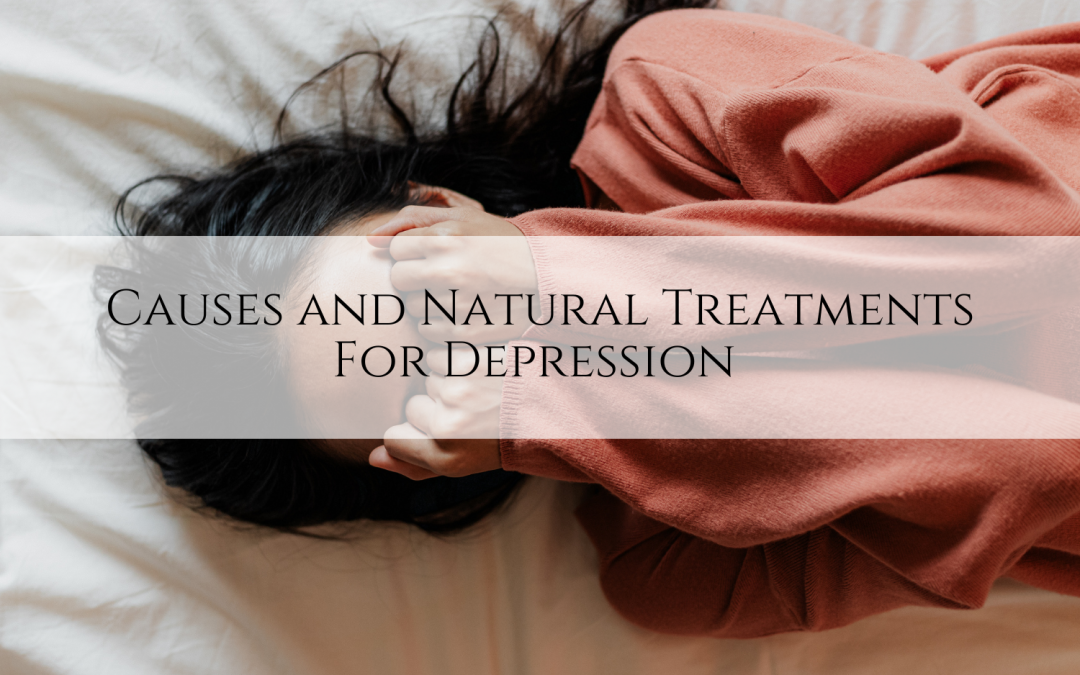 What Really Causes Depression? It’s Not What You Think

You’ve probably heard that depression is caused by a chemical imbalance in the brain, specifically serotonin deficiency. But is this really true? New research indicates the answer to the question “What causes depression?” is far more complicated and that chemical imbalances may not be the main culprit.

If you think that depression is caused by low serotonin or a chemical imbalance, you’re not alone. It’s estimated that 85% to 90% of people believe this is true. Yet, a new review published in the journal Molecular Psychiatry found that “there is no evidence of a connection between reduced serotonin levels or activity and depression.”

What the reviewers did find was evidence that serotonin deficiency was not the main cause of depression.

In a number of studies, researchers artificially lowered serotonin levels in hundreds of people by putting them on diets low in the amino acid that’s converted into serotonin. Lowering serotonin did not cause these healthy volunteers to develop depression.

The reviewers also examined the results of genetic tests from tens of thousands of patients. These studies found no difference between serotonin-regulation genes in people with depression compared with people who are not depressed.

So if serotonin deficiency is not to blame for depression, what is? From the results of the Molecular Psychiatry review and from what I’ve seen as a functional medicine provider, the reason why people become depressed could very well be their exposure to ongoing stress.

Stress causes the adrenal glands to make more of the stress hormone cortisol, and high cortisol levels are linked to depression. So it makes sense that being under stress can lead to feelings of unhappiness.

Cortisol normally boosts the body’s uptake of serotonin. But in people with major depression or generalized anxiety disorder, serotonin uptake due to cortisol doesn’t happen. Scientists believe that when people are chronically stressed out or depressed, the high cortisol levels stop the serotonin transporter gene from doing its job.

The Fight, Flight, or Freeze Response to Stress

It’s possible that the reason why selective serotonin reuptake inhibitors (SSRIs) treat depression is due to their effect on both serotonin levels and cortisol.

Everything your body does, it does to protect you. The fight-or-flight response that occurs during stress is designed for your own survival. However, there’s another component of that response that we never hear about: the freeze response. When the body is overwhelmed by too many stressors, it can simply freeze.

Think of a deer caught in headlights. This is your body’s way of protecting you by “putting the brakes on” with symptoms like low energy, loss of motivation, feeling numb and uninterested. Not coincidentally, these symptoms also happen during depression.

This freeze mode is a survival mechanism, but we’re not meant to live in that state. It’s the nervous system’s way of trying to get your attention to figure out why the fight-or-flight mode is stuck on.

The best thing we can do for depression is help the body overcome stress by dealing with stressors. Our goal is to help the body adapt to stress more easily, which minimizes its effects on your emotional health.

Both emotional and physical stress can cause depression.

Examples of physical causes of depression:

You’ve probably wondered “Can physical pain cause depression”? The answer is yes. In fact, physical health problems in and of themselves can cause a person to become depressed.

A lot of autoimmune patients have some depression and/or anxiety issues that stem from their frustration over their health problems. They’re told that there’s nothing they can do about their problems and they’re going to have to live with these symptoms and be on meds for the rest of their lives. This causes hopelessness and a feeling of gloom and doom that leads to depression.

Other times, the depression in people with physical problems is a sign of being stuck in fight-or-flight mode due to excess stress on the body that it can’t compensate for anymore. A functional medicine provider can help you understand the difference.

Often, when physical health problems trigger depression, simply improving the patients’ health and helping them cope with the stressors leading to their depression results in a better outlook and a happier mood. When people feel more in control of their health it empowers them to overcome their problems, which also plays a role in counteracting depression, too.

This is why when we meet with our patients we tell them our goal is to help them understand how to feel better on their own. They learn so much in working with us. That way they feel very empowered in reversing illness themselves.

How to Be Happier and Treat Depression Naturally

As a functional medicine provider, the first thing I do when someone arrives in my clinical practice with depression is to look for the root cause.

The initial workup includes listening to the patient’s case history and trying to figure out which areas might be the biggest areas of dysfunction. Then I start looking for the answers by determining which tests are necessary, such as testing:

I also try to pinpoint the patient’s greater areas of dysfunction and address their diet through that lens.

Putting into practice these dietary strategies together with lifestyle changes like engaging in moderate exercise are sometimes all patients need to get out of depression.

Brain inflammation is believed to be another root cause of depression. In patients who have a lot of inflammation, a beneficial approach is using anti-inflammatory supplements and blends of micronutrients to replenish what the body needs. This is a very personalized approach based on testing and the patient’s case history, which is why I always recommended that people consult with a functional medicine doctor.

I often recommend turmeric as a natural anti-inflammatory. Supplementing with the antioxidant glutathione is also critical, especially in patients with autoimmune disease who are deficient in antioxidants.

Many people also find cannabidiol (CBD) to work well as an anti-inflammatory, especially for rheumatic patients who can decrease joint pain with CBD. Omega-3 fatty acids from fish oil are another great option. Research has shown omega-3 fatty acids can both reduce inflammation and have natural antidepressant effects.

You can get rid of depression naturally, but you’re probably going to need the help of a functional medicine doctor to order the right tests and dig down deep into what’s really causing your depression.

The best approach, as I mentioned in this article, is to discover what’s stressing out your body and help you cope with these stressors. These might be emotional or physical stressors. I invite you to get in touch with the Caplan Health Institute, so that we can address the stressful things in your life and develop a customized protocol that will get your body and brain in better health. The end result? You’ll be happier and able to enjoy life and your loved ones.