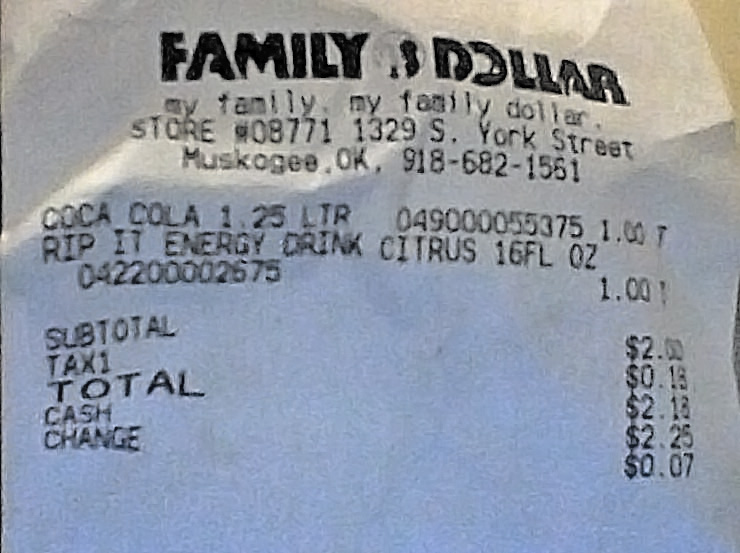 BPA measurements in the subjects’ urine showed BPA levels highest for the first two days after handling the receipts. After one week, three of the six volunteers still showed BPA in their urine.

However, when the subjects ate a cookie with BPA, follow up urinalysis showed BPA levels spiked after five hours but was cleared after a day. The scientists concluded that the body can more quickly metabolize and clear ingested BPA than BPA absorbed through the skin.

BPA (bisphenol-A) is the main component of polycarbonate and is found in water and beverage bottles, plastic lids, the lining of tin cans, food storage containers, dental sealants, contact lenses, and electronics.

Store receipts aren’t the only place people come in contact with BPA. Canned foods often contain significant amounts of the chemical — the lining in a soup can can deliver 1,000 percent more BPA than fresh soup.

Plastics beverage bottles are another common source of exposure, especially if the bottle has been exposed to heat, light, or acids (such as soda).

Plastic food containers, especially if they have been heated, are another common source. Plastic coffee lids, straws, and any other plastics that come in contact with foods deliver BPA as well.

Store receipts aren’t the only source of BPA that can be absorbed through the skin. Other sources of thermal paper that contains high amounts of BPA include fast food receipts, ATM receipts, airline tickets, gas station receipts, lottery tickets, fax paper (if anyone still uses that), etc.

Although this latest study had subjects handle the receipts for five minutes, previous studies have shown handling a receipt for just five seconds transfers BPA through your skin and into your bloodstream. Your skin absorbs ten times as much if your fingers are wet or greasy.

You can even absorb BPA from handling cash that has been stored with receipts.

Why BPA is toxic to the body

BPA is especially toxic to a developing fetus, raising the risk of causing chromosomal errors, miscarriage, and genetic damage.

Recent studies have also shown that BPA can both trigger and exacerbate autoimmune diseases due to its disruptive effect on the immune system. It has been linked to autoimmunity to nerve sheathes, the common target of attach in multiple sclerosis, and to Hashimoto’s thyroid autoimmune disease.

BPA-free is no guarantee

Unfortunately, products listed as “BPA-free” are not a green light either. Many non-BPA plastics also contain synthetic estrogens.

How to reduce your body burden of BPA

Reduce your exposure to BPA as much as possible by not handling receipts and avoiding plastic food and beverage containers. Additionally, help buffer the damage of BPA and other toxins by eating a whole foods diet and supplementing with nutritional compounds that support detoxification and cellular protection. Ask us at Central Coast Center for Integrative Health for more advice.