There isn’t just one cause of diabetes and insulin resistance. So how can any two individuals be treated the same?

According to the Center for Disease Control (CDC), it is estimated that 1 in 3 Americans will have diabetes by the year 2050, a disease that is already costing Americans over $245 billion per year in treatment and prescription drug costs (American Diabetes Association). This diabetic epidemic has the potential to bankrupt the national healthcare system.

Unfortunately, the conventional model views diabetes as a progressive degenerative disease and the standard treatments for diabetes, as set out by the American Diabetes Association, has set protocols focusing on the symptoms of diabetes rather than the underlying dysfunctions.

While insulin resistance is common amongst diabetics, it is certainly not the only cause of blood sugar dysfunction. Many other underlying causes can lead to problems regulating blood sugar. Microbiome imbalance, immune dysfunction, hormonal imbalance, thyroid dysfunction, inflammation, food sensitivities, adrenal dysfunction, liver dysfunction, nutrient deficiencies, toxic exposure and more, can cause the body to lose this invaluable ability to regulate blood sugar.

Diabetes is known as the silent killer because many individuals don’t have any symptoms until end stage complications. 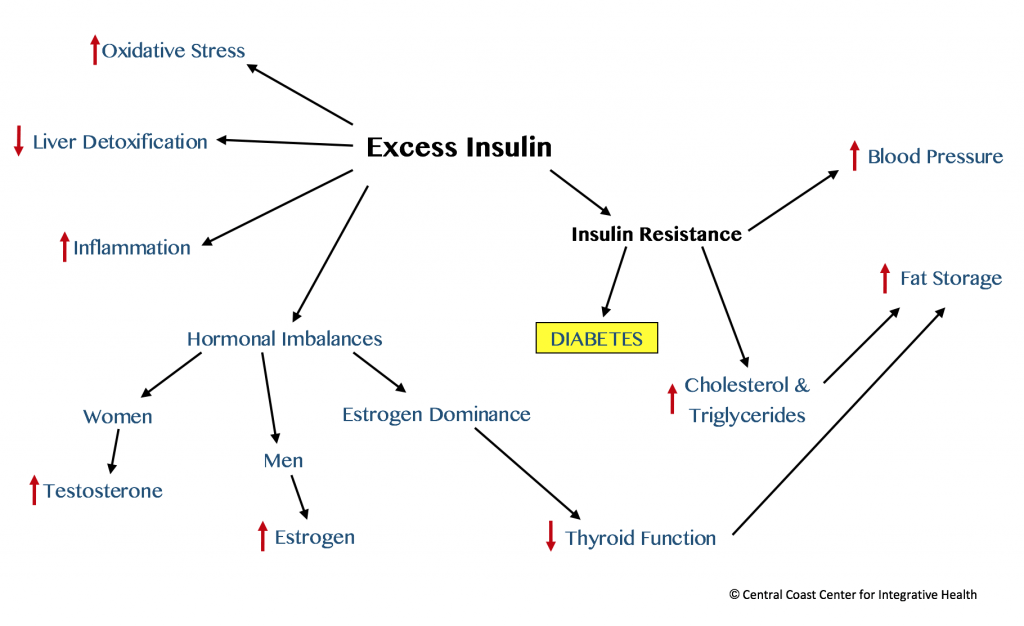 Is Insulin The Answer?

Many Type II Diabetics are led to believe that they will eventually need to use insulin to regulate their blood sugar. While Type I Diabetics are deficient in or have faulty insulin production, most Type II Diabetes are quite the opposite and suffer from Insulin Resistance.

Insulin Resistance is a term to describe when the cells of the body no longer respond to the hormone insulin. This typically occurs from having uncontrolled blood sugar and subsequent insulin surges. This excess insulin can cause problems such as increased lipid production, hormonal imbalance and inflammation.

Adding more insulin to an insulin resistant person may be like pouring gasoline on a fire. It may only make the problem worse.

Can Insulin Resistance be Reversed?

Yes! Many patients are able to completely reverse insulin resistance and it’s many complications.

Through comprehensive lab testing and analysis, we are able to determine these underlying mechanism to better conclude how to address your unique system and give the body what it needs to heal. We will put together a personalized action plan including a comprehensive approach to address nutrition, lifestyle and the root underlying drivers of your diabetes. Schedule a complementary discovery consultation to see if we can help you Reverse your Type II Diabetes.

Take The First Step Today On Your Journey Back To Health

Our patient care coordinators are happy to take your call and get you scheduled to see if our office is right for you.