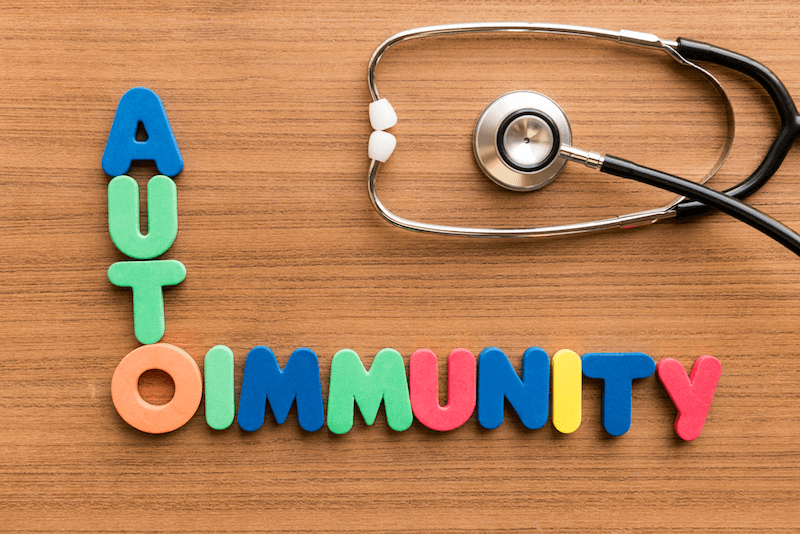 Autoimmunity, a disorder in which the immune system attacks and destroys body tissue, is one of the most prevalent diseases today, affecting predominantly women. Traditionally, autoimmune disease was thought to be primarily a genetic disease, but research increasingly shows that while genetics play a role, intestinal permeability, or leaky gut, is also an important factor. This means your diet can determine whether you develop autoimmunity.

Examples of common autoimmune diseases include:

Leaky gut is a condition in which the lining of the intestines become damaged and overly porous, allowing bacteria, yeast, undigested foods, and other pathogens into the bloodstream where they trigger inflammation. Leaky gut keeps the immune system in a hyper zealous state. This eventually makes the immune system more likely to start attacking the body tissue it was designed to protect, causing an autoimmune condition.

People can develop leaky gut for a variety of reasons, but the most common is linked to inflammatory foods in the diet. These can include too much sugar, processed foods, junk foods, and fast foods. Also, many people have undiagnosed food sensitivities, such as to gluten, dairy, egg, or other foods. These can damage the gut lining if you have an inflammatory reaction to them.

Gluten, in particular, is notorious for its ability to cause leaky gut and trigger autoimmunity. In people who have a gluten intolerance, gluten triggers inflammation in the gut and elsewhere in the body every time they eat it. In gluten sensitive individuals, gluten also acts on messenger compounds in the intestinal wall to make it more permeable. This allows more inflammatory factors into the bloodstream, including more gluten, in a self-perpetuating vicious cycle.

For some people, simply going gluten-free can repair a leaky gut and dampen autoimmunity.

Other causes of leaky gut that trigger autoimmunity

Knowing why you have leaky gut is an important strategy in not only in repairing it, but also in dampening autoimmunity. Below are some known causes of leaky gut that can, in turn, trigger autoimmunity:

Repairing leaky gut has been shown to help many people dampen autoimmunity and even put it into remission. This involves briefly following an anti-inflammatory diet to figure out which foods are triggering inflammation in you, following guidelines to restore or maintain oral tolerance, and including some nutritional compounds to support the healing of your gut lining.

How do you know if you have leaky gut?

Many people aren’t aware they have leaky gut. The condition has only recently been accepted as valid by conventional medicine, and many doctors may still not know about it. However, some symptoms to look out for include bloating, gas, constipation or diarrhea, food sensitivities, and inflammation in other parts of the body, such as the joints, skin, or brain (brain fog, depression, slow thinking, fatigue, etc.)

Sometimes autoimmunity itself causes leaky gut as it creates chronic inflammation that can damage the gut wall. This is particularly true in the case of autoimmunity to gut tissue, which may cause symptoms of irritable bowel syndrome.