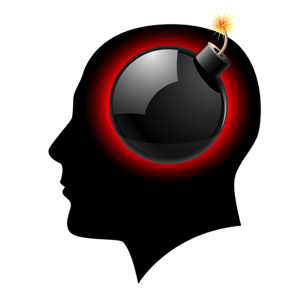 A new study has shown what we have known for some time in functional medicine: Chronic inflammation causes brain fog and mental sluggishness — many people with chronic health conditions report these symptoms.

In the study, 20 healthy young male volunteers received a salmonella typhoid vaccine, which temporarily spikes inflammation. On separate days they received a placebo shot of saline and did not know on which day they received the vaccine.

They were then given cognitive testing in areas challenging alertness, prioritizing sensory information, and the ability to make executive decisions when presented with conflicting information.

The results showed that the area affected by the inflammation from the vaccine was alertness. The other two areas did not change.

The researchers suggested that inflammation impacts brain networks involved in mental alertness and that anti-inflammatory drugs may be warranted.

Fortunately, functional medicine offers solutions for brain fog and mental sluggishness. The key is to find and address the source of chronic inflammation.

But first, do you suffer from these symptoms associated with brain inflammation?

Instead, brain inflammation most often manifests as brain fog and sluggish brain function.

This is because brain inflammation hinders energy production in neurons, making it harder for them to communicate with one another. This causes the brain to slow down and fatigue more easily. Things like reading, working, concentrating, or driving for any length cause fatigue.

The brain has its own immune system made primarily of microglia cells. In the past they were considered nothing more than glue that held brain cells together, but now we know they are very important and outnumber neurons ten to one.

The brain’s immune cells do not have a built-in off switch like the body’s immune cells. As a result, brain inflammation can burn through brain tissue like a slow-moving fire, worsening brain function over time. We see this often in people suffering from symptoms from a brain injury they had years ago.

Also, when not fighting inflammation, the microglia cells carry out very important and necessary “housekeeping” work that keeps the brain healthy and functioning.

Healthy microglia get rid of dead neurons, beta amyloid plaque, and other debris that interfere with nerve communication. They also support neuron metabolism and synapses.

This is especially true in children, whose brain immune cells help “prune” developing neural pathways so that the brain develops as it should. Children whose brains are besieged by inflammation suffer from glitches in these pathways and their brain does not follow healthy developmental patterns.

Brain inflammation not only causes brain fog and mental sluggishness, it also accelerates the degeneration of the brain. This raises the risk of neurodegenerative conditions such as dementia, Alzheimer’s, Parkinson’s, multiple sclerosis, and more.

In fact, brain aging is linked more to brain inflammation than simply getting older.

What leads to brain inflammation and brain fog?

Basically, chronic inflammation anywhere in the body can inflame the brain. This can include chronic joint pain, infections from bacteria, viruses, or parasites, leaky gut or gut inflammation, or an undiagnosed and unmanaged autoimmune condition.

If you have brain fog or mental sluggishness, see if any of these factors could be contributing:

If you start to feel more mental clarity when addressing underlying causes of brain fog, that means you’re on the right track.

While working on the dietary and lifestyle factors that trigger brain fog, the following compounds can also help dampen brain inflammation:

The amount you take depends on the degree of brain inflammation. Ask my office for more information.